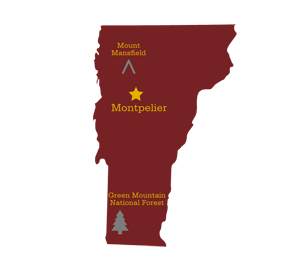 Vermont provides counsel to indigent youth alleged to be delinquent or children in need of care and supervision (CHINS) through a state-funded system of public defender offices, contract attorneys, and appointed attorneys, all coordinated through the Office of the Defender General. When public defenders or contract defenders cannot represent a client due to conflicts, the court appoints an ad hoc attorney to the case.

Vermont has no statutorily mandated or recommended training requirements or standards for attorneys representing youth in delinquency proceedings.

In Vermont, “[t]he court shall appoint an attorney for a child who is a party to a proceeding brought under the juvenile judicial proceedings chapters,” unless counsel has already been retained. Vt. Stat. Ann. tit. 33, § 5112(a); Vt. R. Fam. Pro. 6.

A youth is specifically entitled to counsel at the following stages:

Youth in Vermont may waive their rights to counsel if “the court determines, after opportunity to be heard, each of the following:

(A) That there is a factual and legal basis for the waiver or admission;

(C) That the waiver or admission is in the best interest of the ward;

(D) That the waiver or admission is being entered into knowingly and voluntarily by the ward and also by the guardian ad litem, except as set forth in (4) below.” Vt. R. Fam. Pro. 6(d)(3).

In Vermont, youth have a right to counsel in the following post-disposition proceedings:

The age of a youth who comes within the jurisdiction of the state’s juvenile courts is defined by state law. In Vermont:

Despite the existence of juvenile courts, many youth are still tried as adults. In Vermont, juveniles can be prosecuted as adults through:

NJDC has not yet conducted an assessment of the juvenile indigent defense system in Vermont. If you would like to collaborate with NJDC to fundraise for, plan, or engage in an assessment in this state, please contact us.