The question of how to treat children in the justice system has long been an issue of examination and reexamination by the U.S. Supreme Court. The Court has consistently held that children are entitled to many of the same due process rights as adults. With that understood, however, the Court has also consistently held that, from a developmental standpoint, youth are different from adults, which greatly impacts how courts should treat them in a whole host of areas, such as waiver of rights, culpability, and punishment. The following case summaries describe the United States Supreme Court’s major jurisprudence in the arena of juvenile justice. 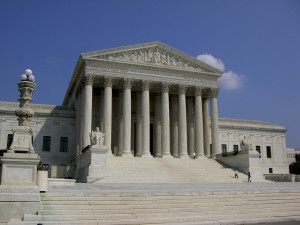 In re Gault, 387 U.S. 1 (1967). This decision was the turning point for the rights of juveniles in U.S. Courts. It was the first time that the Supreme Court held that children facing delinquency prosecution have many of the same legal rights as adults in criminal court, including the right to an attorney, the right to remain silent, the right to notice of the charges, and the right to a full hearing on the merits of the case.  More…

Kent v. United States, 383 U.S. 541 (1966). A juvenile court does not have unlimited parens patriae power. It is not entitled to act with “procedural arbitrariness.” The decision to waive a juvenile to adult court requires first providing the young person with basic due process: a hearing, effective assistance of counsel, and a “statement of reasons” for the decision.

In re Winship, 397 U.S. 358 (1970) The Supreme Court held that for adjudications of delinquency, the standard of proof required is the same as for criminal cases (beyond a reasonable doubt). As Gault confirmed, “civil labels and good intentions do not themselves obviate the need for criminal due process safeguards in juvenile courts.”

McKeiver v. Pennsylvania, 403 U.S. 528 (1971). The United States Supreme Court held that the Due Process Clause of the 14th Amendment did not guarantee the right to trial by jury in the adjudicative phase of a state juvenile court delinquency proceeding. Were a jury—a major formality in the criminal process—imposed on juvenile trials, there would be little left to distinguish a juvenile delinquency hearing from a criminal trial, Justice Blackmun wrote for the plurality. Also of significance to Blackmun was the fact that the pre-Gault 1967 President’s Commission on Law Enforcement and Administration of Justice, Task Force Report on juvenile delinquency did not recommend that juveniles be provided with jury trials. Finally, the plurality held that because juries are not necessary to ensure adequate fact-finding, as such, they are not vital for due process.

Breed v. Jones, 421 U.S. 519 (1975). Once a juvenile is tried in an adjudicatory hearing, it is a violation of the Double Jeopardy Clause of the Fifth Amendment to subsequently give him a criminal trial for the same act. Gault and its progeny narrowed the differences between the adult criminal process and juvenile process—but McKeiver and others are doctrinal reminders that the due process requirements imposed by the Constitution are not identical for juvenile delinquents and adult criminals.

Roper v Simmons, 543 U.S. 551 (2005). The imposition of the death penalty for crimes committed by juveniles is cruel and unusual punishment within the meaning of the 8th Amendment. Justice Kennedy, writing for the majority, noted that the Court consistently limited the death penalty to the very worst of offenders.  Citing to the most recent social and neuroscience, he discussed three general characteristics separated children from adults, simultaneously serving to remove juveniles from the category of the very worst of offenders. First, juveniles lack maturity and have an underdeveloped sense of responsibility, resulting in impetuous and ill-considered actions and decisions. Second, juveniles are more vulnerable and susceptible to negative influences and outside pressures, including peer pressure. Third, the character of a juvenile is not as well formed as that of an adult.  Thus, they possess far more potential for rehabilitation.

Graham v. Florida, 130 S.Ct. 2011 (2010). Expanding upon the analysis in and logic of Roper, the Supreme Court held that it was unconstitutional to impose the penalty of life imprisonment without the possibility of parole on juveniles. The opinion also noted that young people have difficulty participating in their own representation. While “a state need not guarantee the offender eventual release…it must provide…some realistic opportunity to obtain release before the end of that term.” The holding in Graham left unanswered what the Court meant by a “realistic opportunity to obtain release.”

J.D.B. v. North Carolina, 131 S. Ct. 2394 (2011). The Court decided whether age was a factor defining “custody” for Miranda purposes. J.D.B., age 13, was a special-education student, suspected of burglary. During school, while J.D.B. was in class, a uniformed police officer brought him from his classroom into a conference room, where he was questioned by the assistant principal, school administrator, and a police investigator. He was never read his Miranda rights, nor were his guardians notified. J.D.B. incriminated himself in the burglaries. Only after J.D.B. incriminated himself in the burglaries was he informed that he was free to leave. Justice Sotomayor wrote the Court’s Opinion, holding that in some circumstances, a child’s age “would have affected how a reasonable person” in the suspect’s position “would perceive his or her freedom to leave.” A child’s age is far “more than a chronological fact,” she continued. Referencing Roper, the Opinion cited to “commonsense conclusions about behavior and perception,” that apply broadly to children as a class. Children “generally are less mature and responsible than adults,” they “often lack the experience, perspective, and judgment to recognize and avoid choices that could be detrimental to them,” and they “are more vulnerable or susceptible to . . . outside pressures” than adults. In the specific context of police interrogation, events that “would leave a man cold and unimpressed can overawe and overwhelm a [teen].” The Opinion concluded that age is a factor to be considered in determining whether an individual is “in custody.”