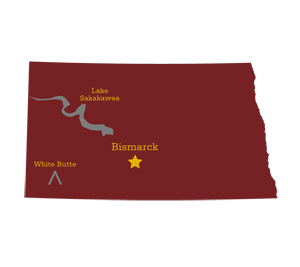 North Dakota provides counsel to indigent youth through a state-funded system overseen by the Commission on Legal Counsel for Indigents (CLCI). North Dakota has seven full-time public defender offices responsible for representing indigent adults and youth. In geographic areas where there is no public defender office or where there are conflicts, indigent legal services are provided by private attorneys who contract with CLCI.

CLCI has adopted a number of standards and policies regarding the representation of indigent clients, including a standard on minimum qualifications for contract counsel and public defenders. This standard requires counsel to have “sufficient training and experience to provide effective representation” but is not specific to youth cases. In addition, CLCI created the Minimum Attorney Performance Standards for Juvenile Unruly and Delinquency Matters.

North Dakota has no presumption of indigence in juvenile court proceedings. The determination of whether a child is indigent is based on the parents’ financial situation. N.D. Cent. Code Ann. § 27-20-26(2). A child is considered indigent if the child or their parents, “at the time of requesting counsel, are unable, without undue financial hardship, to provide for full payment of legal counsel and all other necessary expenses for representation.” N.D. Cent. Code Ann. § 27-20-26(2).

A youth in North Dakota may waive their right to counsel when the youth is represented by their parents or guardian and if, considering the totality of the circumstances, the waiver is made knowingly, intelligently, and voluntarily. In re R.D.B., 575 N.W.2d 420, 423 (N.D. 1998). A youth may not waive their right to counsel if they are not represented by their parent, guardian or custodian; the parent’s presence alone does not constitute representation. In re R.P., 745 N.W.2d 642, 646 (N.D. 2008).

When and how the court may decide to detain a youth or otherwise place restrictions on the youth’s freedom is defined by statute and court rules. In North Dakota, a detention hearing must occur promptly, and no later than 96 hours after the youth is detained. N.D. Cent. Code Ann. § 27-20-17(2). Juvenile Rule 2, however, reduces the time required for the hearing to 24 hours if the child is in secure detention. Other provisions for the detention of youth are found in N.D. Cent. Code Ann. §§ 27-20-13; 27-20-17.

An order of disposition committing a youth adjudicated delinquent to the Division of Juvenile Services remains in force for not more than 12 months, not including any time on parole. N.D. Cent. Code Ann. § 27-20-36(2). The juvenile court may extend the 12-month period if (1) a hearing is held before the expiration of the order, (2) reasonable notice of the hearing and opportunity to be heard are given to the child and parent; and (3) the court finds that the “extension is necessary for the treatment and rehabilitation of the child.” N.D. Cent. Code Ann. § 27-20-36(2).

The age of a youth who comes within the jurisdiction of the state’s juvenile courts is defined by state law. In North Dakota:

Despite the existence of juvenile courts, many young people are still tried as adults. North Dakota has two ways that youth can be prosecuted as adults:

NJDC has not yet conducted an assessment of the juvenile indigent defense system in North Dakota. If you would like to collaborate with NJDC to fundraise for, plan, or engage in an assessment in this state, please contact us.