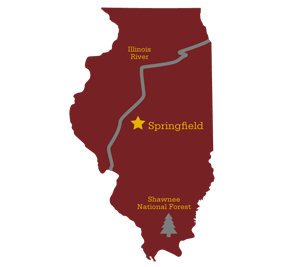 Illinois provides counsel to indigent youth through a county-based system. Counties with a population greater than 35,000 must establish a public defender office. 55 Ill. Comp. Stat. Ann. 5/3-4001. Smaller counties may establish public defender offices alone or in conjunction with a county within the same judicial circuit. 55 Ill. Comp. Stat. Ann. 5/3-4002, 5/3-4003.

Upon the agreement of the prosecutor and the youth and with the approval of the court, Illinois youth charged with drug-related offense are screened for eligibility for juvenile drug court. 705 Ill. Comp. Stat. Ann. 410/25.

“At the request of any party financially unable to employ counsel . . . the court shall appoint the Public Defender or such other counsel as the case may require.” 705 Ill. Comp. Stat. Ann. 405/1-5(1).

“No hearing on any petition or motion filed under [the Juvenile Court Act] may be commenced unless the minor who is the subject of the proceeding is represented by counsel.” 705 Ill. Comp. Stat. Ann. 405/1-5(1).

A youth is specifically entitled to counsel at the following stages:

When and how the court may decide to detain a youth or otherwise place restrictions on the youth’s freedom is defined by statute and court rules. In Illinois, a detention hearing must be held within 40 hours of detention, excluding weekends and court holidays. 705 Ill. Comp. Stat. Ann. 405/5-415(1).

The legal needs of youth in the delinquency system rarely end at disposition, and states vary in the way they provide a right to representation on these post-disposition issues.

The age of a youth who comes within the jurisdiction of the state’s juvenile courts is defined by state law. In Illinois:

Despite the existence of juvenile courts, many youth are still tried as adults. Illinois has two ways that youth can be prosecuted as adults:

The Illinois Assessment was completed in 2007.