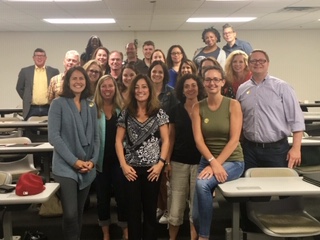 This training was grant funded in part by the

OJJDP’s Smart on Juvenile Justice: Enhancing
Youth Access to Justice State Reform Implementation
Program which was awarded to Delaware in 2016.

States in Our Region

Energized by the awarding of the FY16 OJJDP’s Smart on Juvenile Justice: Enhancing Youth Access to Justice State Reform Implementation Program grant, Delaware continued its juvenile justice reform efforts in 2018.  As a result, the Delaware Office of Defense Services (ODS)  implemented various improvements as contemplated by its Strategic Plan. These successes are detailed in its Year in Review. Highlights include multiple juvenile expungement clinics in which hundreds of individuals were assisted in clearing their juvenile records, statewide juvenile justice conferences attended by all stakeholders with presentations by regional and national experts, and quarterly JTIP trainings for juvenile defenders.   These efforts coincided with the release of NJDC’s Delaware Assessment and aim to correct the noted gaps in the delivery of juvenile defense services.  Funding to retain the 4 juveniles defenders working under this grant has been included in the governor’s recommended budget released in January 2019.  With this funding, ODS will continue to be able to provide leadership to reshape the course of juvenile justice in Delaware.

Additionally, ODS and various community partners successfully advocated for numerous pieces of legislation. These reforms include the expansion of juvenile expungement, enlargement of the Juvenile Civil Citation program, minimization of the use of minimum mandatory sentencing for juveniles, limitations on the housing of juveniles in adult prisons, and changes to when juveniles must be prosecuted as adults for certain firearm-related charges. More efforts are planned for 2019.

This booklet is a youth and family-friendly guide that provide general information about the collateral consequences of juvenile court involvement in New Jersey and includes numerous resources available to assist youth in overcoming these barriers.  Defenders may utilize the booklets as they counsel clients about collateral consequences before trial and after disposition.  This guide can help prepare youth for the potential hurdles they may face as they transition to adulthood and connect them to much-needed information and resources.

New Jersey continues its innovative efforts to improve the juvenile justice system with several new reforms.  In 2016 the legislature adopted N.J.S.A. 2A:4A-26, which significantly amended the juvenile waiver process. This law further restricted those juveniles eligible for waiver by eliminating certain offenses and excluding all juveniles under the age of 15, while expanding factors the prosecutor must consider when confronted with a waiver. In 2017 New Jersey continued its reform with the enactment of R. 5:19-4. This rule requires that juveniles in detention are no longer presumed to appear in court in restraints and clearly sets forth stringent guidelines for the use of restraints in the court room.  In 2018, New Jersey expanded the expungement process, allowing more juveniles to erase their adjudications. Now, New Jersey’s Office of the Public Defender(OPD) is proud to facilitate the expungement of any juvenile case that qualifies. In addition, this year the OPD is excited to partner with the NJDC to sponsor a two-day training for juvenile defenders in the region.  The OPD looks forward to continuing its tradition of providing first class legal services to those in need, while maintaining the groundbreaking spirit required to perpetuate reform.

The Legal Aid Society in New York has multiple successes in 2018 as detailed below.

On October 1, 2018, New York State implemented step one of its Raise the Age (RTA) legislation. Prior to October 1, 2018, all youth 16 and over, regardless of the level of the offense charged, were prosecuted as adults with no access to Family Court at all. Now, 16 year olds charged with misdemeanors (with the exception VTL cases) are considered Juvenile Delinquents and will receive the same treatment in Family Court that any other Juvenile Delinquency case receives. All 16 year olds charged with felonies will continue to have their cases originate in the adult system, but will be eligible for removal to Family Court. The path for removal will be much simpler for non-violent felonies than violent felonies. And beginning October 1, 2019, 17 year olds will be treated in the same manner. Although this legislation does not reflect the level of relief that The Legal Aid Society and other advocates fought for and has significant flaws that need to be addressed, early indications in New York City are that many youth are having their cases removed to Family Court and avoiding the prospects of a criminal record in the process.

Another significant aspect of RTA is that as of October 1, 2018, all 16 and 17 year olds held in custody in New York City (NYC) have been moved off the notorious Riker’s Island and are now being housed in a secure juvenile detention facility, regardless of whether their cases have been removed to Family Court. This, too, has come with complications as many of these youth are still in at least the shared custody of the New York City Department of Corrections (DOC) and the New York City Administration for Children’s Services (ACS). The Legal Aid Society along with other advocates are pushing aggressively for DOC to be removed from the secure juvenile detention facility and for New York City youth to be in the exclusive care of ACS staff.

In order to reduce the stigma and harm associated with the arrest and prosecution of youth, The Legal Aid Society’s Juvenile Rights Practice (JRP) and pro bono partner Cravath, Swaine, and Moore, LLP have been advocating with multiple New York City and New York State agencies to ensure that juvenile delinquency (JD) records are sealed, destroyed and handled in a confidential manner in accordance with New York State law. The New York State Division of Criminal Justice Services (DCJS), responsible for the state-wide fingerprint database, reportedly purged nearly 10,000 juvenile delinquency fingerprints that it had retained in error going back decades. Additionally, after persistent efforts by JRP, the NYPD has acknowledged that it has been unlawfully retaining JD fingerprints in its own AFIS fingerprint database in violation of FCA § 306.1(4) (which unequivocally prohibits local law enforcement from maintaining a copy of JD fingerprints once they are sent to DCJS upon arrest).  As a result, the NYPD: (1) no longer retains the fingerprints of newly arrested JDs; (2) has issued a policy embodied  NYPD Legal Bulletin Vol. 48, No. 4, dated May 2018, reflecting the new practice; (3) has audited AFIS to ensure that JD fingerprints are purged once they are forwarded to DCJS; and (4) has committed to purge those JD fingerprints previously retained in error in the coming year.

The Legal Aid Society’s Juvenile Rights Practice (JRP) along with pro bono partner Davis, Polk & Wardwell, LLP, are working to end the indiscriminate use of shackles during transport for New York City youth held in secure juvenile detention.  Under threat of litigation, LAS JRP met with the New York City Administration for Children’s Services (ACS) and ACS agreed to do individualized assessments of JDs to determine whether shackles are necessary before each transport to and from secure detention.  LAS is  working with ACS to develop its new policy and assessment tool and to ensure this process is implemented as soon as possible. In addition, ACS agreed to move newly arrested youth admitted to secure detention by police (who score low on the NYC probation risk assessment tool) directly to non-secure detention without the use of shackles and has implemented this process.