Connecticut has a statewide Division of Public Defender Services overseen by a bi-partisan commission. The Division employs a staff of permanent juvenile defenders throughout the state, and has a federally-funded Juvenile Post-Conviction & Re-Entry unit that represents adjudicated juvenile clients who have been committed to the Department of Children and Families. The Division contracts with private attorneys who serve as “Assigned Counsel” when the Division has a conflict of interest.

The public defender is empowered to investigate claims of indigence. An indigent child is one who does not have the financial ability at the time of his request for representation to secure competent legal representation, or to pay other legal expenses. Conn. Gen. Stat. § 51-297(f). 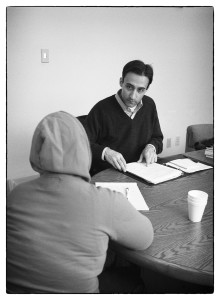 For any juvenile, the determination of ability to pay includes the financial resources of her parents or other guardian. Conn. Gen. Stat. § 51-299.

Conn. Gen. Stat. § 46b-136 allows a judge to appoint counsel for a child even in the absence of a request for counsel if the court “determines that the interests of justice so require.” There is no specific juvenile statute but juvenile case law interprets and utilizes the adult waiver of counsel statute: A waiver will be accepted only after the judicial authority makes a through inquiry and is satisfied that the defendant (1) has been clearly advised of the right to the assistance of counsel, including the right to the assignment of counsel when so entitled; (2) possesses the intelligence and capacity to appreciate the consequences of the decision to represent oneself; (3) comprehends the nature of the charges and the proceedings, the range of permissible punishments, and any additional facts essential to a broad understanding of the case; (4) has been made aware of the dangers of self representation. In re Manuel R., 543 A.2d 719 (Conn. 1988).

No conditions exist that prevent the juvenile from waiving their right to counsel.

As of October 1, 2015, a child age 15 or older can be transferred to the adult court fot a felony charge. Automatic transfer occurs if the child is charged with a Class A or specified Class B felonies. P.A. 15-183. Children are presented in juvenile court, where age is established but no other argument is allowed. All other felonies may be transferred upon motion of the State’s Attorney and after a hearing where the state must prove that transfer is in the best interest of the child and the community. Conn. Gen. Stat. § 46b-127