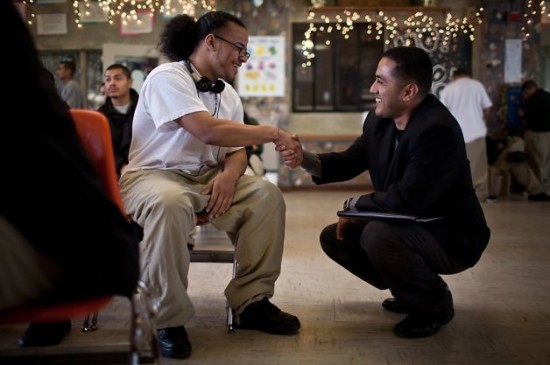 Defender Center is the

regional affiliate of the

The Center for Children’s Law and Policy (CCLP) conducted a statewide assessment of Maine’s juvenile justice system, presented its final report of findings and recommendations to the Maine Juvenile Justice Assessment and Reinvestment Task Force. The three goals of the assessment were “to (1) understand what the juvenile justice system is doing well, (2) identify the gaps and barriers that limit the system from achieving the best public safety and youth outcomes, and (3) outline a roadmap of concrete recommendations to overcome these gaps and barriers going forward.” Read the full report here.

Students from the Juvenile Justice Clinic in collaboration with the MCJPAL Juvenile Justice Reform Work Group and the Maine Association of Criminal Defense Lawyers created a summary of legislation relating to juvenile justice reform that was either enacted by or carried over from the first regular session of the 129th Legislature. The second regular session of the 129th Legislature will convene in January 2020. Read the summary here.

Highlights from the news article

“Manson currently holds more than 300 boys and young men between the ages of 15 and 21. In order to be sent there, the young people must have committed, or be accused of, a crime serious enough to land them in the adult criminal justice system. But the number of sentenced and presentenced juveniles sent to Manson before their 18th birthdays has dropped dramatically over the last decade.”

“In the state’s 2007-2008 fiscal year, there were 1,491 such teens admitted to Manson. Ten years later, 105 juveniles were admitted to the facility, an almost 92% decrease that juvenile justice experts attribute to a combination of factors, including a change in state law that took some 16- and 17-year-old offenders out of the adult prison system and a slew of diversionary programs intended to support, not punish, young people who have run afoul of the law.”

“I think there is a general awareness in Connecticut that secure confinement is less effective at reducing recidivism than interventions that address the root causes of criminal justice system involvement.” Marc Pelker who is Gov. Ned Lamont’s undersecretary of criminal justice policy and planning

2019 Legislative Updates from the Connecticut August 8, 2019

PA 19-110 FURTHER AMENDS C.G.S. 46b-133 CLARIFYING WHEN A CHILD MAY BE FOUND TO POSE A RISK TO PUBLIC SAFETY FOR PURPOSES OF SEEKING TO DETAIN A JUVENILE IN MOTOR VEHICLE LARCENY CASES

We had over 90 attendees for our annual conference. Please see the agenda below and reach out if you would like to access any of the materials generated from the day. 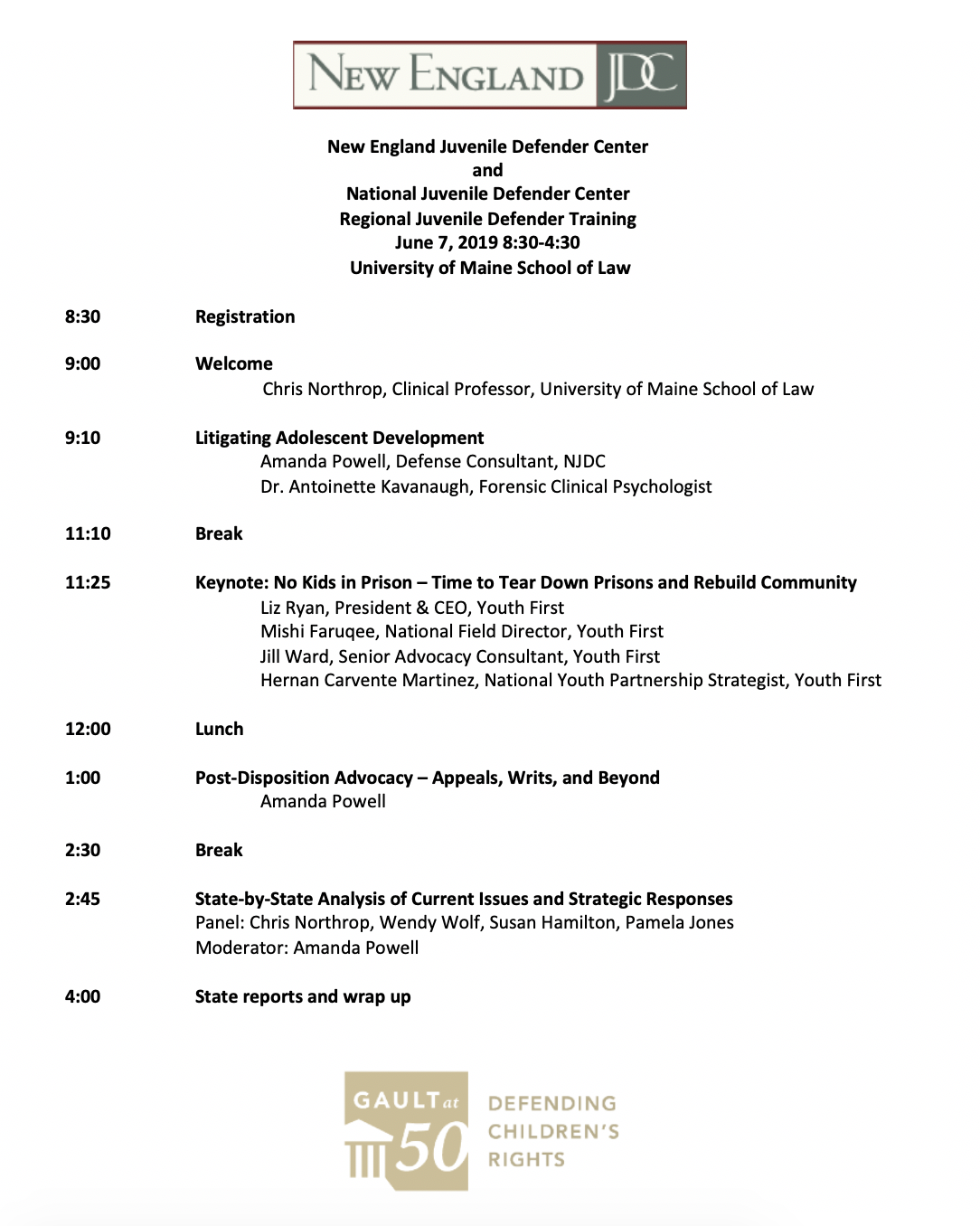 Report from the University of Maine School of Law and Muskie School of Public Service of Maine March 6, 2019

Place Matters: Aligning Investments in a Community-Based Continuum of Care for Maine Youth Transitioning to Adulthood calls for the development of a range of service in communities to support youth and their families. 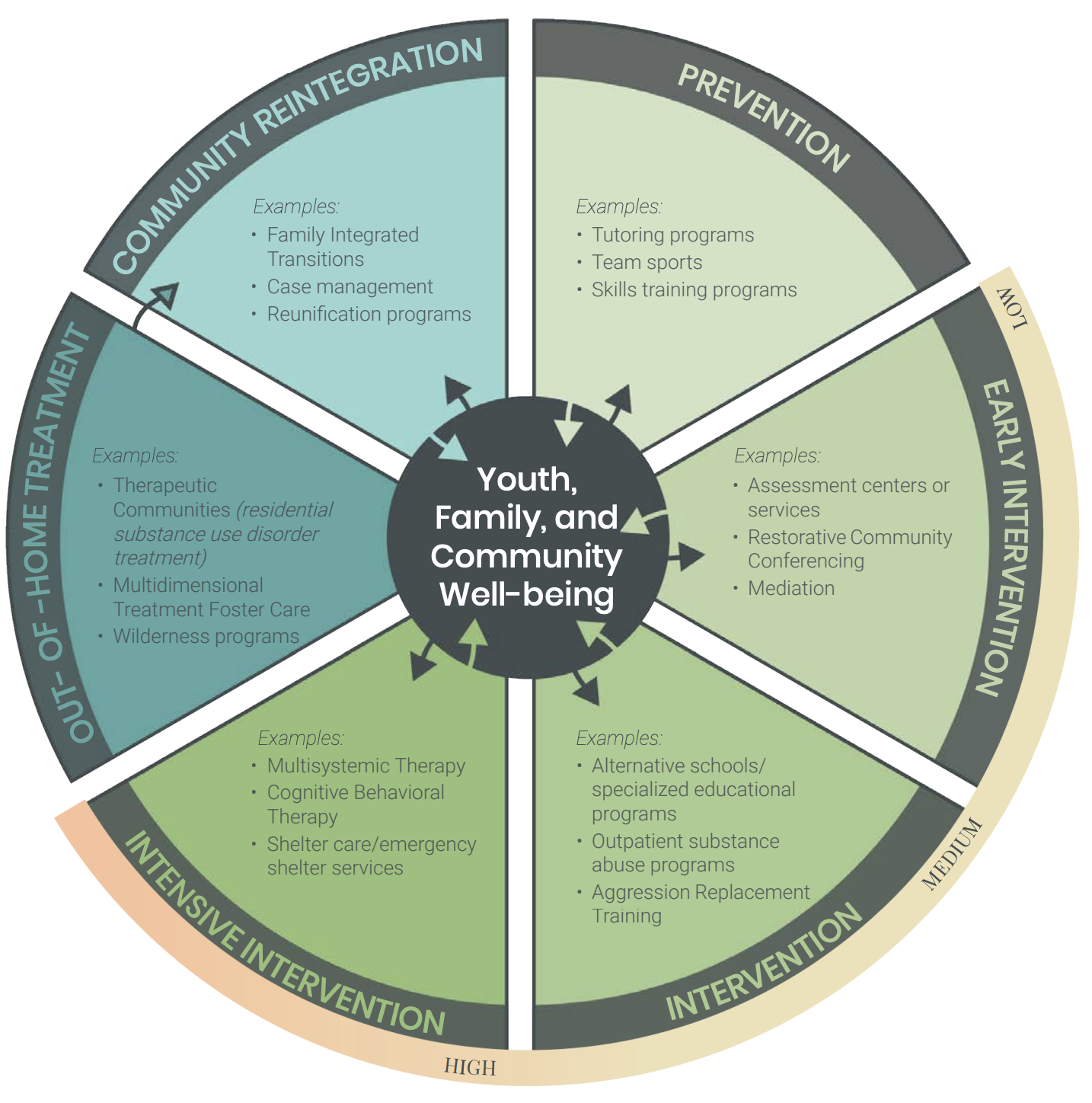 State of Connecticut’s Office of the Child Advocate: Incarcerated/Detained Youth – An Examination of Conditions of Confinement January 19, 2019

Recommendations from the report

2018 Legislative Updates from the Connecticut December 2018

Effective 8/1/2018, school districts having 6,000 or more students must designate a liaison to facilitate transitions between the district and juvenile and criminal justice systems.  Liaison responsible for assisting in ensuring that students returning from “justice system custody” are promptly enrolled and evaluated for special education services, receive proper credits and that school records are promptly transferred to the appropriate district.

For many years, Professor Northrop has dedicated his work to ensuring and increasing fairness in the juvenile justice system. In 2006, he left private practice to join the Maine Law faculty and launch the Juvenile Justice Clinic at the Cumberland Legal Aid Clinic. He teaches his students best practices for representing juveniles using a model of holistic representation to ensure that the clients’ broader educational, safety, and medical needs are addressed as well as their legal needs. He established “Tuesdays at the Teen Center,” a weekly meeting with homeless teens at the Preble Street Teen Center, where clinic students provide free legal advice and resource referrals.

Read the press release from the University of Maine Law School, here.

1:00 – 2:45  Using Adolescent Development to Challenge Mens Rea in Delinquency, YO and Adult Court,

Vermont’s Bold Step to Include 18 and 19 year-olds Under Family Court Jurisdiction May 30, 2018

To read the language of the bill, click here.

Here are a handful of the bill’s provisions directly impacting system-involved juveniles:

To read the language of this new legislation, click here.

Congratulations to Connecticut on the closure of Connecticut Juvenile Training School Apr. 12, 2018

“In Connecticut, we’re leading the nation in rethinking our approach to criminal justice, especially when it comes to the treatment of our young people,” Connecticut Governor Daniel Malloy said. “The Connecticut Juvenile Training School was an ill-advised and costly relic of the Rowland era. It placed young boys in a prison-like facility, making rehabilitation, healing, and growth more challenging. The fact remains that this isn’t a celebratory moment, but a time to reflect on the past mistakes made when it comes to juvenile justice, and an opportunity to create a system that better serves our young people and society as a whole.”

This news received praise from national expert Vincent Schiraldi: “The fact that Connecticut’s juvenile arrest rate has plummeted alongside its decline in youth imprisonment means that state policy makers have figured out a way to make Connecticut residents safer while incarcerating fewer of their sons and daughters, something policy makers in other states should pay attention to.”

To learn more about recent successes arising out of Connecticut, click here.

On November 17th, the newly formed Maine Center for Juvenile Policy and Law (MCJPAL) and the University of Southern Maine’s Justice Policy Institute collaboratively hosted Youth Justice in Maine: Imagining a New Future. This event convened nearly 100 national and local experts, juvenile justice practitioners, and youth voices, all of whom are committed to improving youth justice in Maine. Presentations and remarks were given by Vincent Schiraldi, Shaena Fazal, Gail D. Mumford, and more.

See the Summit agenda and view slides from the presentations here. To read the white paper generated from the Summit, Youth Justice in Maine: Imagine a New Future Summit Summary & Recommendations, click here.

In mid-October, the Massachusetts state Senate approved a criminal justice bill that would, among other things, raise the age of jurisdiction by juvenile courts from 18 to 19. A House version of the bill, unveiled Monday, raises the lower end of the jurisdictional age of the state’s juvenile courts from 7 to 10 years old while leaving the upper limit unchanged at 18. This initiative comes only four years after Massachusetts raised the age of juvenile delinquency from 17 to 18.

New Hampshire Governor Chris Sununu signed the bill into law in June of this year and the reforms are being phased in through September of 2018. The updates provided for by the legislation include prohibiting secure detention for most non-violent offenders and developing a plan, to be presented to the Legislature, to place non-violent offenders outside the Sununu Detention Center.

To read more about these new laws, click here.

In August, the Vermont legislature tasked a statewide Advisory Panel with a number of duties relating to the intersection of law enforcement, racial disparities, and the juvenile justice system.