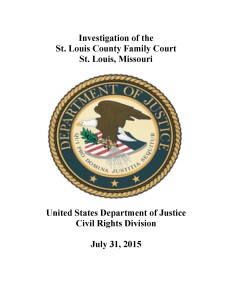 On July 31, 2015, the Department of Justice Civil Rights Division issued historic Findings in the Investigation of the St. Louis Family Court stating that there is reason to believe that the St. Louis Family Court engages in conduct that violates the constitutional guarantees of Due Process and Equal Protection under the law. Citing the National Juvenile Defender Center’s 2013 Assessment of Access to and the Quality of Juvenile Defense Representation in Missouri, the DOJ Findings lament that little has changed in response to the gaps NJDC found.

With regard to violations of Due Process rights for children, the DOJ found that the St. Louis County Family Court:

The DOJ also made the following Equal Protection findings:

In addition to the full Findings report, the Department of Justice website contains several other related documents.

The report has garnered wide media attention, including this article from the New York Times.