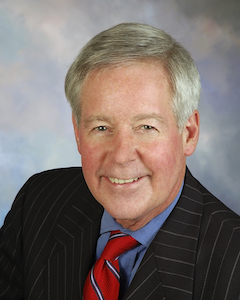 John “Jay” Elliott has been a leading juvenile defense attorney for more than three decades. He has been involved in the criminal justice system even longer—actually beginning his career in law enforcement. As a current attorney in private practice in Columbia, South Carolina, Jay remains a tireless advocate for due process and the rights of young people in conflict with the law.

Although based in South Carolina for much of his life, Jay’s presence is just as strong on the national juvenile justice reform stage. He has received two major awards from the American Bar Association – the Pro Bono Publico award for his work in advancing the legal rights of children, and the John Minor Wisdom award for his work on death penalty appeals and other significant criminal litigation.

Jay is known to take on “pet projects” of which he is particularly proud. Calling them “pet projects,” though, pays his tremendous efforts too short shrift. The term belies the fact that he goes above and beyond what passion alone would produce. For example, he and several other advocates in South Carolina started a new non-profit organization called the Lawyers Committee for Children’s Rights, which is devoted to improving the legal rights of children and youth in South Carolina, including a right to effective legal representation in all courts. The organization was instrumental in the passage of legislation prohibiting indiscriminate shackling of youth. Because of these efforts, South Carolina passed a law in 2014 ending the practice statewide. Jay then took his work to the national stage, coauthoring a resolution for adoption by the American Bar Association denouncing indiscriminate juvenile shackling. The resolution passed in February 2015 and remains an important tool inspiring similar change across the country in numerous counties, judicial districts, and throughout entire states.

Jay is currently a member of the Southern Juvenile Defender Center advisory board, and the Governor’s Juvenile Justice Advisory Committee (the state advisory group for administration of the Juvenile Justice and Delinquency Prevention Act in South Carolina). All of his previous board memberships in the service of the public and marginalized populations are too numerous to mention. They include varied groups such as the Council of Child Abuse and Neglect and the South Carolina Commission on Appellate Defense.

Jay possesses a keen grasp of strategy and diplomacy. Experts from South Carolina and across the nation have turned to Jay time and time again for his counsel and insight. Thus, he has been on several Governor’s Commissions and has served as a consultant to the South Carolina Governor’s office on juvenile defense projects. He also chaired and co-chaired several ABA Committees throughout the 80s and 90s.

Those of you who know Jay, however, know that first and foremost he is kind and compassionate—a southern gentleman with sharp wit and a strongly held desire to protect the rights of children. He is easily relatable, yet one of a kind.

A true champion for change, Jay continues to blaze trails in South Carolina and across the country. He is one of many great leaders that make the juvenile defense community strong.