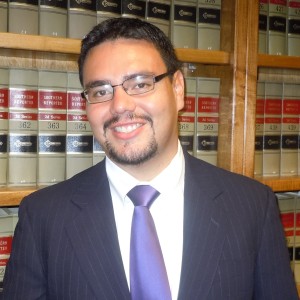 Although Hector had no clear plans to enter the juvenile defense field while in law school, he was devoted to embarking on a career in public interest law. A graduate of New York University School of Law and a native Louisianan by way of El Salvador, Hector longed to return to his roots in New Orleans to engage in “transformative public interest work that empowered disadvantaged and underserved communities.”  As fate would have it, Hector returned to New Orleans as a Southern Poverty Law Center Special Education Fellow at the Juvenile Justice Project of Louisiana (JJPL), where he became part of a team that developed and implemented a project for systemic special education reform in the state aimed at dismantling the school-to-prison-pipeline for disabled students classified as Emotionally Disturbed. Hector’s work in special education advocacy at JJPL was far from peripheral in the juvenile defense field as the two worlds often intersect. During his tenure at JJPL, Hector was exposed to the ills and the perils facing Louisiana youth who came into contact with the juvenile delinquency system. JJPL’s dedication to juvenile indigent defense reform and juvenile conditions of confinement in Louisiana inspired Hector to forge a career in juvenile defense in his home state by becoming a staff attorney at a fledgling non-profit called Juvenile Regional Services (JRS), now known as the Louisiana Center for Children’s Rights.

The aftermath of Hurricane Katrina amplified the longstanding failures of Louisiana’s juvenile delinquency system nationally. The systemic barriers facing the state’s juvenile defenders were paralyzing and resulted in grave injustice for Louisiana’s children.  In the midst of tragedy, juvenile indigent defense advocates and former JJPL staff members galvanized reform efforts in 2006 by creating JRS, the country’s first standalone non-profit juvenile public defender office, to transform what was once deemed one of “the most troubled” juvenile justice systems in the country.[i] Based on best practices that embraced holistic advocacy, JRS sought to change the culture of juvenile defense practice in Orleans Parish. Hector was among a core group of attorneys at JRS that helped to reform a system that had placed administrative convenience over due process, facing a backlash and resistance from juvenile court judges, prosecutors, and court staff. Despite this initial resistance, these zealous advocates gained the respect of juvenile court professionals in the parish overtime that laid the groundwork for increasing juvenile defense specialization and uplifting juvenile defense practice across Louisiana. In addition to providing direct advocacy to youth, Hector co-edited and contributed to the Louisiana Juvenile Defender Trial Practice Manual spearheaded by JJPL that serves as an instrumental guide to juvenile defense practice in the state.

After serving on the frontlines for some time, Hector answered the call to raise up a new generation of juvenile defenders in LSU Law Center’s Juvenile Defense Clinic. As a clinical professor, Hector takes great pride in promoting juvenile defense as a specialization and assisting law students to hone key skills that are integral to juvenile defense practice. Hector works tirelessly to instill the core values of the practice and provide his students with an invaluable, hands-on learning experience that Hector’s students’ carry with them into their respective careers. Since Hector’s involvement with the clinic, nearly a third of his students have gone on to establish a career in juvenile and criminal justice. The Louisiana State Bar Association recognized the clinic’s work in 2012 by awarding it the state’s Children’s Law Award for providing outstanding service in the field of children’s law.

In addition to teaching in the Juvenile Defense Clinic, Hector is actively involved in juvenile defense policy work in Louisiana. A dedicated leader in the field, Hector currently serves on the Louisiana Public Defender Board, where he helps oversee the statewide delivery of high quality indigent defender services affecting adults, children, and families by actively participating in the board’s training, policy and oversight initiatives. Hector is also a member of the Louisiana State Law Institute Children’s Code Committee, where he affects juvenile justice policy reform in collaboration with a diverse group of stakeholders across the various child-serving systems. Hector also previously served as the team leader for Louisiana’s Juvenile Indigent Defense Action Network, where he participated in the development of state standards for juvenile delinquency representation and the passage of legislation related to the early appointment of counsel and the presumption of indigence.[ii]  Hector also provides regional leadership by serving on the Advisory Committee of the Southern Juvenile Defender Center, a regional affiliate of NJDC that supports juvenile defenders in the southern states.

Finally, as a Certified JTIP Trainer, Hector is part of a corps of trainers providing cutting-edge juvenile defense training to attorneys throughout Louisiana and around the country using NJDC’s Juvenile Immersion Training Program (JTIP) curriculum. Hector’s skill and talent for engaging students and attorneys alike makes him one of our nation’s go-to juvenile defense trainers.