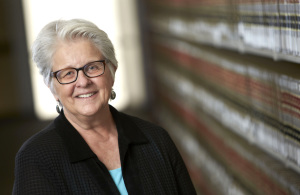 Mary Berkheiser wears many hats:  educator, advocate, power-broker, and clinician – any one of these accurately describes who she is and what she does. But it is the fact that Mary is all of these that makes her a leader in the juvenile defense community and true juvenile defense trailblazer.

As a founder of the William S. Boyd School of Law at the University of Nevada, Las Vegas (UNLV) – Nevada’s first and only law school– Mary has left an indelible mark on legal education in the state.  But it’s her passion for protecting the rights of children that makes her a leader in juvenile defense, taking on issues such as waiver of counsel, shackling, and juvenile life without parole on a local, state, and national level.

Mary started her professional life as a high school English teacher at an alternative school in one of Tucson’s poorer neighborhoods. Her students were the ones no one else knew what to do with or wanted. Either they were already court-involved or about to be. Several had probation officers and were on the verge of being kicked out of school. The alternative program represented their last chance to get a diploma. But instead of being daunted, for some reason, Mary found tutoring these students more fulfilling than teaching the straight-A kids. The texture of her students’ lives — some working, some pregnant, many first-generation American often from rural areas in Mexico — made working with them more interesting. She was fascinated by the complexity of their stories and celebrated small victories like getting them to come to class every day.

After ten years in education, however, Mary decided to pursue another calling — the law.  Initially working for a top corporate Arizona law firm, Mary couldn’t get the experiences she had interacting with young people out of her mind. When the firm dissolved Mary went back to teaching — eventually merging her desire to work with at-risk kids and the law by laying plans to start a juvenile justice clinic at Arizona State University College of Law and serving as a judge pro temp on detention hearings. She’d found her calling! When she was invited to become a founding member of the William S. Boyd School of Law at UNLV, she jumped at the chance.

The early years of building the law school were tough. The faculty was small – only seven at the beginning – and the tasks were many – ranging from creating a three-year curriculum and student code of professionalism to adopting tenure standards, admitting ever new classes of students and hiring faculty at a breath-taking clip. As if this wasn’t enough on her plate, Mary began thinking about what it would take to start a juvenile justice clinic. She had just come across A Call for Justice, the National Juvenile Defender Centers’, national assessment of access to counsel and quality of representation in juvenile delinquency proceedings. She met with Nevada juvenile defenders and learned first-hand how Nevada’s youth were by-and-large being denied their constitutional right to counsel. Mary recalled one of the local juvenile hearing masters nonchalantly commenting that there were far too many kids in the system to give them all lawyers. Using A Call for Justice as her touchstone, Mary authored The Fiction of Juvenile Right to Counsel: Waiver in the Juvenile Courts, her first major juvenile justice article.  Conducting that research was the impetus Mary needed to start a juvenile justice clinic in the fall of 2000, at UNLV.

Right out of the gate, the students tackled the overwhelming rate of kids waiving counsel by drafting legislation that required a youth to make a knowing and voluntary waiver, on the record. That draft legislation was signed into law in 2001.  Mary had successfully married her desire for teaching, working with at-risk youth, and providing holistic representation.

This year, UNLV celebrated its 16 year anniversary and the juvenile justice clinic Mary founded turned 15. Mary’s commitment to improving juvenile defense has helped to create a community of juvenile defenders where there wasn’t one before. She continues to blaze new trails by spearheading a campaign to end indiscriminate shackling policies in Clark County — and across the state, promoting safe-harbor legislation, and ending juvenile life without parole.  Not one to rest on her laurels, as long as challenges remain for youth who get caught up in the system, Mary will be hard at work inspiring tomorrow’s lawyers to help today’s kids.